“A Night in Juarez” (front) 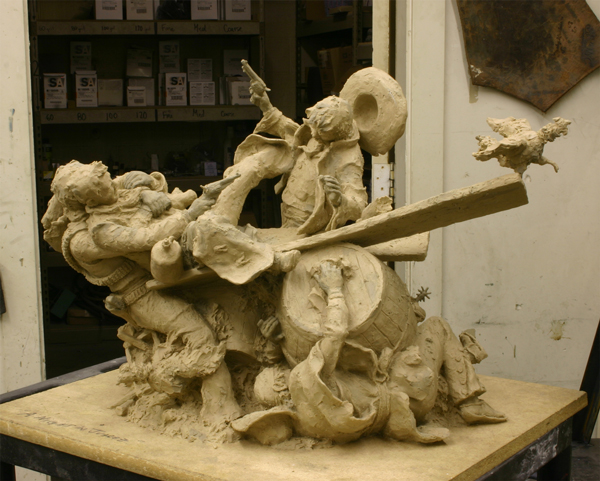 “A Night in Juarez” (front)

“A NIGHT IN JUAREZ”

Ever had a hankerin’ satisfied…by bein’ roughed up by it?

I visualize a cowman…young in years…whose worked his way across the border from Texas (Tejas) into old Mexico….just to see what was on the other side. He happens into a rough town and an even rougher cantina. Looks were exchanged…perhaps a cross word…he didn’t have to skin very deep before he hit bear.

I could’ve easily called this piece “Bad Whiskey, Short Tempers and Wild Men”. Maybe I’ll save that one for another sculpture.

Most of the bars and saloons Hollywood portrays did not exist. In the ‘real’ Old West, it was often dank places consisting of sod huts, dirt floors, old barrels with 2 x 12 planks laying on top. One may of heard the cackling of chickens, both inside and out. The whiskey found in such places was often made of anything that would ferment and have a bite to it.