Cheyenne to Deadwood (side view) 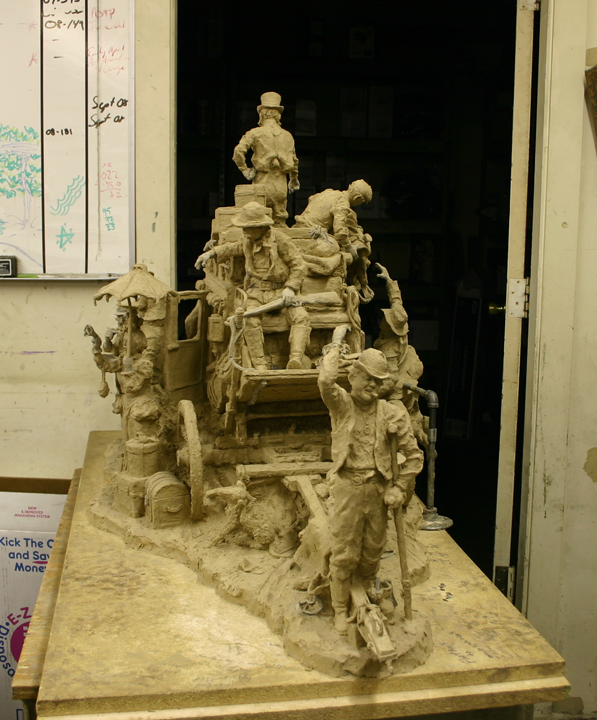 With this sculpture I explore the unique relationships people ‘out west’ found themselves in while traveling. I put in the forefront of people’s minds the host of personalities that mingled west of the Mississippi. Represented are the immigrant stationmaster and his hired hands, the stable bum with a broke leg. There is a Chinaman and stoic Indian. I show a family with children, a soldier and a cowboy. Front and center is a woman who finds herself in new surroundings (out of place and not really knowing what she’s got herself into). I depict the old coot and a flea bitten dog that lives off of scraps. I set this piece within the backdrop of a stagecoach, all being overlooked upon by the weathered man riding shotgun.

Look for the subtle clues that will let you go deeper into the piece. Notice the whiskey that wrecked havoc amongst the Native Americans….I placed a case of the ‘fire water’ at the feet of the Indian. There is a strong box being watched by an armed guard (Gold was a huge part of bringing people out west). There are tin cans of empty food (“Yes!” Out west they had tin cans of food). The cowboy travels with his saddle (A cowboy’s string of horses was often provided by the outfit he worked for). The Chinaman represents the thousands of his race that built the railroad and then disseminated into the west. There is a hatbox still to be unloaded (I’m quite sure there is plumage from an exotic bird from South America within its contents…quite a sensation, back in the day). The young boys have marbles (A mainstay among boys of that era). The father and two boys are not seen with a wife / mother (Did she pass away in childbirth? Such a circumstance was common in that era). Tucked in the ‘boot’ of the stagecoach is a bottle of whiskey for the driver….to take the chill off during the long cold stretches). The hunger for information, from relatives and back east, was highly prized – note the leather pouch to carry the U.S. Mail.
SCOTT ROGERS