“When the Law had Rough Edges” 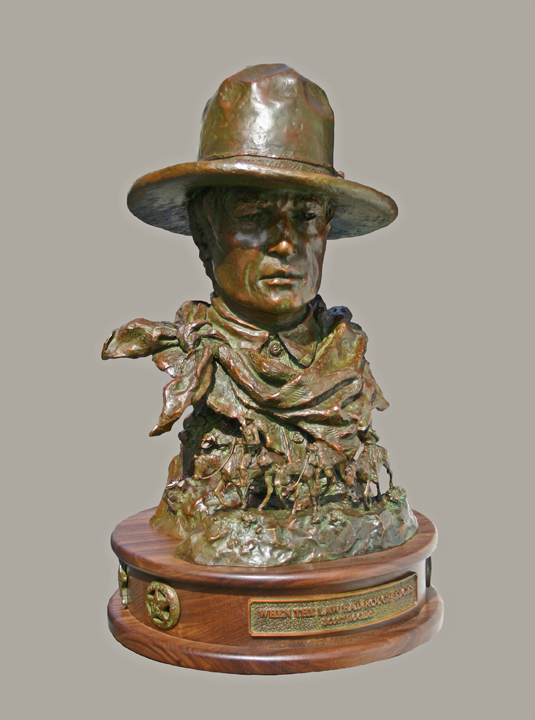 “When the Law had Rough Edges”

“WHEN THE LAW HAD ROUGH EDGES”

He’s never tried to figure out the ‘why’ of what men do…it’s just that, when they go against the law it leaves a taste in his mouth that he can’t spit out. His whole life seems to be fighting for what he’s come to know as ‘right’. These boys were rough. It took weeks to track ‘em, as they were edgy and spooked real easy. When he did get ‘em cornered, one of ‘em gave him no out…but to cut him down.

With this piece, I wanted to show strength of character in a man’s face…one whose gaze and features represent what ‘Law’ stands for. He’s a man who ‘willingly’ rides alone – while faces his own fears. Not for the “Thanks” of society (which rarely comes) but for a deeper sense of justice…’a knowing of what must be done’.

Ever pondered that every thought one thinks…every word uttered…works its way into ones face? How could it be otherwise? I once heard the phrase…”The show of his countenance witnesses against him”. I have asked myself the question, “If I was convicted of being an honest man, would there be enough evidence in my eyes to convict me?”

Note: My uncle, Grant Speed (sculptor), made famous the ‘bust with a vignette’ idea. Over his career he created eighteen such pieces. About 3-4 months prior to his passing in 2011, I sat with him in his kitchen (he looked good in a bathrobe). For over ten years, I’d pondered following his lead in combining a bust with a vignette, and told him so. I feel blessed that three times in our conversation that morning, he gave me his blessing to do so. He shared with me a few things about balance and design that make these type of concepts work. Thank you, Big G!